THE BOUNDARY BETWEEN FULHAM AND HAMMERSMITH & THE POSTCODE ANOMALY

An article written by our Chairman for the Hammersmith and Fulham Historic Buildings Group.

Fulham was inhabited in Roman times, probably until the early 5th century AD. Archaeological excavations in the late 1980s uncovered a late 5th/6th century Saxon settlement on the site of the former Manbre sugar works at the end of Winslow Road, also the remains of Parr Ditch, which is the historic boundary between Fulham and Hammersmith. Incidentally, this was the site of Brandenburg House and its grounds, the home of Queen Caroline, the divorced consort of King George IV, who died here in 1821.
After the Dark Ages the first recorded date for this location is AD704/5 when the Bishop of the East Saxons (London) acquired a place called Fulanham from the Bishop of Hereford. It included Hammersmith and is virtually identical to the present Borough, Parr Ditch being the common boundary. The ditch was a branch of Stamford Brook that flowed down Brook Green, hence the name. After crossing Hammersmith Road, it became the boundary between Fulham and Hammersmith. 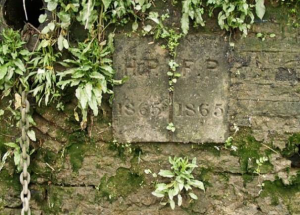 Originally the boundary was slightly south of the present day statue of Capability Brown. In the river wall may be seen the brick archway outlet of the brook and above it a stone bearing the initials HP and FP, pictured above, and the boundary line between Hammersmith Parish and Fulham Parish. The ditch was culverted as a sewer during the 19th century. This would tend to indicate that before the 8th century Fulham and Hammersmith were two separate districts but by the time of the Bishop’s acquisition the two districts had been united.
The boundary has slightly shifted over the years but basically runs along Chancellors Road, Yeldham Road, south of Margravine Gardens, west of Gliddon Road cutting through the former St Paul’s School playing fields and the school itself, then meeting the Hammersmith Road opposite Brook Green. It then turns right along the centre of Hammersmith Road ending at Addison Bridge. The other side of the railway line is Kensington. The railway follows the line of the culverted Counters Creek – also known as Billingwell Ditch – and where it enters the Thames known as Chelsea Creek (now Chelsea Harbour). Counters Creek separated Hammersmith from Kensington, and Fulham from Chelsea.
In 1857 London was a post town but due to its rapid expansion was divided up into many separate postal districts, hence SW, W, EC, N, etc. Fulham was designated as being SW, Hammersmith as W. In 1889, the Post Office decided that the part of Fulham north of Crabtree Lane would get a better delivery service from the Western District office that had its HQ at Paddington. This caused much controversy in Fulham and the Vestry Clerk wrote to the Postmaster General complaining. The Post Office was striking out Fulham on letters and writing Hammersmith. In 1906, Sir William Bull, MP for Hammersmith put a question to the Postmaster General in the House of Commons as Fulham people didn’t like being told they lived in Hammersmith. This was to no avail. The same applied to Fulham residents being told they lived in West Kensington, W. The number suffixes were added to London postal areas in 1917 to increase efficiency of delivery; it has been said to be due to the temporary employment of women postal workers due to the shortage of men because of the Great War.
The Office of National Statistics, in its Postcode Look-up User Guide 2011, states categorically that ‘Postcode areas are defined and used by Royal Mail for the purpose of efficient mail delivery and have no relationship with administrative and electoral areas’. So although Charing Cross Hospital is styled Hammersmith, W6 it is located in Fulham.
Keith Whitehouse,
Chairman
Fulham & Hammersmith Historical Society