We have another set of connections from two of our committee.

Colonel Mordaunt’s Cock Match although a gruesome subject and possibly full of double entendres and other dubious images this was painted by Zoffany c.1784.  Do look at the picture here and the extensive discussion of the subject matter.  In brief it shows:

Asaf-ud-Daula, the Nawab Wazir (governor) of Awadh and Colonel John Mordaunt, an employee of Britain’s East India Company, on the left in white and also has Zoffany with his arm over the white armchair.

Wikipedia states that “Mordaunt was the illegitimate and nearly illiterate son of the 4th Earl of Peterborough by Robiniana Brown. (See “ Peterborough House” by Sue Pierson FHHS publications for more details).

The colonel had managed to be assigned to Warren Hastings and through him he was appointed head of security. His real role however included organising entertainments. Mordaunt and his employer were said to have shown the same low tastes in entertainment. Even at that time, cockfighting was not well regarded in British society. Mordaunt had arranged for British birds to be brought to India, where he used them to take on local cockerels.”

The Zoffany painting was commissioned for Warren Hastings by his private secretary a certain John Belli.

Now a certain Colonel John Cockerell who also had had a successful career with the East India company enters the story, he had a sister Elizabeth Cockerell who married for a second time the private secretary John Belli, and of course Colonel John’s brother was none other than Samuel Pepys Cockerell, who did some architectural work for Hastings.

Samuel himself would of course be working on restoring Fulham Palace for the Howleys many years later .

Samuel Pepys Cockerell was the great great nephew of Samual Pepys the diarist who himself in the past had visited Fulham Palace and commented on the fine botanical specimens there of Bishop  Compton. Samuel Pepys was a former pupil of St Paul’s school, when it was near the cathedral.

Why was he working for the Howleys?, well John and Elizabeth Belli’s 1st daughter was Mary Frances and she married on 29 Aug 1805, to certain a William Howley , a private tutor in Somerset who in 1809 was appointed regius Professor of Divinity at Oxford University and then he became Bishop of London in 1813. Mary was the “Howley heiress” refered to by Fulham Palace tour guides, inherited from her fathers successful East India company career that helped fund the alterations to Fulham Palace and the loss of the crenellations of Terricks improvements c. 1777.

Furthermore the builder employed by Cockerell was a certain Henry Holland . Henry Holland Snr, (20 July 1745– 17 June 1806) was an architect to the English nobility and was born in Fulham, where his son , also Henry, helped run the building firm constructing several garden designs for a well known gardener architect. Henry senior ,along with other members of the family are buried in All Saints Church yard and Henry’s son married Bridget, the daughter of Lancelot Brown known as “Capability Brown “ , who was of course the famous landscape architect we have just referred to. He lived sometime on Hammersmith Mall , and left in 1764 to live at Hampton Court. He was responsible for developing over 200 landscapes, many of them now National Trust, and has a recent statue up by Distillery Wharf near to Hammersmith bridge.

Bridget was also interred in the Holland tomb.  There is a separate memorial in All Saints church to her.

Incidentally Lancelot Brown was born only about five years after Henry Compton’s famous Gardener – George London died. London was responsible for many of the shortlived baroque Gardens in English country houses’, and hewas buried along with his wife in All Saints church, in 1712.

Jane Bowden-Dan also commented on the Zoffany of the Sharp family saying it would be good as part of a forthcoming Temporary Exhibition at Fulham Palace celebrating Bishop Beilby Porteus and his circle, which included the Sharps.

Jane returned via the childhood home of Sir Paul Gordon Fildes OBE FRS at Woodland House, Melbury Road, Holland Park W14, now owned by Robbie Williams! It was built for his father Sir Luke Fildes, a portrait artist, by Richard Norman Shaw. Jane’s connection is that she has been investigating a photo album rescued from a skip at her block of flats on the Thames that she has discovered belonged to Sir Paul who was a Pathologist and Microbiologist at the Royal Naval Hospital Haslar during WWl and at Porton Down in WWll working on Anthrax. 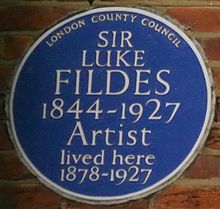 Phew!! I hope you survived that monumental feat of name dropping, I have never added so many tags to a post.

This entry was posted on Thursday, September 10th, 2020 at 4:11 pm and is filed under Buildings, People, Places, Uncategorized. You can follow any responses to this entry through the RSS 2.0 feed. You can leave a response, or trackback from your own site.

This site uses Akismet to reduce spam. Learn how your comment data is processed.