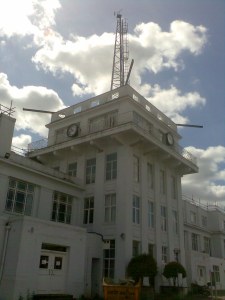 About a dozen members visited the Croydon Airport Museum in the old Terminal Building, itself a Grade II listed building in a recognisably early 20th century neo-classical style. The building is oriented to the points of the compass rather than the line of the road. Meeting in the old arrivals and departure lounge the group were able to take a coffee at the snack bar and explore the visual panels of the Museum. Our guide gave us an overview of the layout and the history of this the first international Airport with its own purpose designed buildings. Although the lager part of the building is given over to commercial offices the foyer museum and the Control Tower convey the feel for what it must have been like in the early days of air travel. There are many photographs of the developments in air-travel and of the airport. Initially WW1 RAF Beddington and the NAtional Aircraft Factory No1 were combined with an enlarged runway and the new terminal. Displays of aircraft seating showed how important weight was, and still is, in commercial travel; some of the seating resembling Lloyd loom chairs! There were a number of families also visiting and the youngsters were drawn to a PC running a flight simulation giving the feel of taking off and landing an early airliner. Without exception they all crashed on landing but one of our young at heart members managed a safe landing. Honour satisfied we all repaired to the Gypsy Moth pub across the road for lunch, itself a reminder that Sir Francis Chichester had first flown aircraft from here before transferring his adventures and the name to yachts.

This entry was posted on Thursday, July 2nd, 2015 at 11:09 am and is filed under Museums, Visits. You can follow any responses to this entry through the RSS 2.0 feed. You can leave a response, or trackback from your own site.

This site uses Akismet to reduce spam. Learn how your comment data is processed.